The Best
of British
Traditions

Which one
is your
favourite? 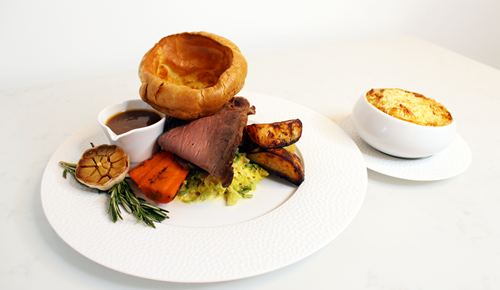 This beautiful British delicacy is served all over the UK, originally introduced in 1840, this dining experience has taken over the UK with variations of this delicious dining experience in restaurants up and down the country. Scones and cakes served alongside the finest array of teas is the perfect choice for families, dates or friends catching up on quality time.

Here at The Lowry Hotel, our afternoon tea is served Thursdays – Sundays with unique menus created for occasions such as Father’s Day, the Queen’s Jubilee, and Christmas. Sweet treats and savoury delights fill the menu, and you can always be sure that there’s scones with a dollop of cream and sweet jam to accompany.

Did you know that the Yeoman of the Guards, nicknamed “beefeaters,” were called this because of their love of eating roast beef?

Many believe that the Sunday Roast emerged under the reign of King Henry VIII, a feast for the wealthiest of people. For many, a Sunday lunch is at the heart of Britain, whether it’s a homemade dinner or served in a restaurant. Brits indulge in full plate of meat, veggies and Yorkshire puddings drizzled with gravy over a table surrounded by friends and family. The traditional Sunday roast has been a long-standing tradition through the United Kingdom and has become a staple of family dining.

Although a Sunday roast is a huge crowd pleaser, it’s a tradition based on familial values and spending time with those you love over a well-cooked meal filled with comfort and tons of flavour. The River Restaurant serves a traditional Sunday Roast with a five-star twist where you can decide on a starter, main and dessert because after all, a Sunday Dinner is about time with the ones you love, no matter the dishes being served.

The Full English Breakfast dates back all the way to the 1300s making it one of the longest traditions in Britain. During the Victorian era, a full English was considered an elegant affair with only the wealthiest being served the dish, this meal was regarded as the most civilized way to start their day. The Edwardians saw the middle – classes evolve the dish to a ‘common’ meal, transforming the fry up into something similar to what foodie’s see today. What had started as a meal for wealthy people only became household breakfast by the 1950s, served in ‘greasy spoon’ cafe’s where workers tended to grab their morning kick. The modern English breakfast has grown in popularity across the pond in America, with the seemingly controversial addition of hash browns.

The food of brits differs in all parts of the country, Manchester has its own personal delicacies such as Manchester caviar which is better known to most as mushy peas. This year the Manchester Food & Drink Festival is back for its 25th anniversary and The River Restaurant are bringing a touch of luxury with our five-star menu that showcases Manchester favourites in a delicious way.

With Bread Factory sourdough and focaccia to start the menu, beautiful bread dishes will appease appetites and prepare palettes.

The menu is full of local favourites such as Manchester caviar, a perfect treat served with sumptuous smoked chicken and a sprinkle of parmesan. If that wasn’t enough for you, next is a dish that’s full of flavour; a Boddington’s braised beef cheek rag pudding that pays homage to the Manchester born brewery.

Perhaps you’ll indulge in a Manchester tart with a five-star twist; vanilla custard, raspberry jam, and coconut coming together to create a delicious dessert that is sure to tantalise your tastebuds. If you prefer savoury with just a touch of sweetness, an Eccles cake served with traditional Lancashire cheese will melt in your mouth. To finish this unique, flavourful menu is a light and lavish dessert of coffee and petit fours.

A taste of Manchester doesn’t get much more luxurious than this.